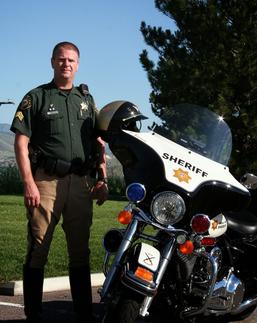 January 26, 2014 - Sgt. Dave Baldwin, whose radio call sign was MC-1, was killed in the line of duty after being struck on his motorcycle by a wrong way driver on Colorado State Highway 93.  As a result members of the Rocky Mountain Chapter of the Defenders Motorcycle Club, with the help of the "I Love U Guys Foundation, organized a motorcycle ride to benefit the family of Sgt. Baldwin.

The ride took place on May 4, 2014, with over 600 riders in attendance. This was made possible with the additional help of retired principal Frank DeAngelis of Columbine High School and KNUS Radio personality Peter Boyles.  It was an incredible show of support by everyone in the community.

In 2015, the same group of people decided to host the ride again to benefit Officer John Adsit and his family.  Officer Adsit was injured while on duty in December of 2014.

The same group of individuals that helped to start the MC1 Honor Run have decided to officially apply for status as a 501c(3) Non-Profit Organization.