"On December 31, 2017, I was shot in the line of duty with the bullet missing my heart by less than half an inch.  My injuries included a collapsed lung, punctured diaphra​gm, multiple broken ribs, and a lacerated liver.

I spent 20 days in the hospital and underwent several procedures. My recovery process was very long and difficult, but MC-1 supported me all the way through and they are still here for me today.

While going through my recovery, the MC-1 Foundation contacted me and asked to meet me.  They informed me of what they do and said they just wanted to help my wife and I during this difficult time in our lives.  The MC-1 Foundation was a bright spot for me when I was facing new challenges each day. They’ve treated my wife and I like family since the first day we met them and support us financially while I was recovering. There is no way to thank them enough for everything they have done for us.  We are grateful for their support and their friendship each day.” 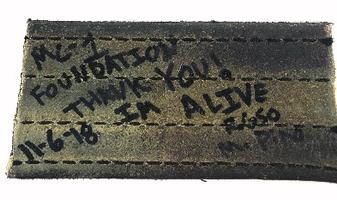 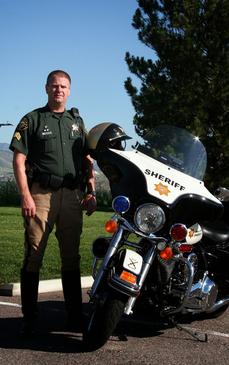 “I had heard a little about the MC-1 Foundation from other officers but I didn’t truly understand what they did until I needed them. On December 31, 2017,

I was shot in the line of duty along with three of my partners. My partner, Zack Parrish, was killed.

I had a long road to recovery, both physically and mentally. I am truly blessed to have had the MC-1 Foundation come into my life. The MC-1 Foundation accepted me into their family immediately and offered me the support that I needed. Through the MC-1 Foundation, I was able to network with other law enforcement officers who have been in similar situations as mine and understood what I was going through.

Even after returning to full duty, the MC-1 Foundation is still there for me - whether it is in the form of an invitation to events where I could meet other survivors or to offering just a kind word.

I am truly blessed to be a part of the MC-1 family!” 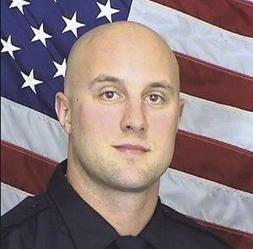 In 2020, Jefferson County Sheriff's Department Deputy Vaughn was involved in an on-duty car accident when his patrol vehicle was ran into by another motorist. He sustained multiple injuries and has been off work since Fathers Day 2020. He and his wife are expecting their first baby any day now.

"I don't have the words to thank ... the MC-1 Foundation enough.  Thank you, and thank you for taking the time out of your day to come here and see us." 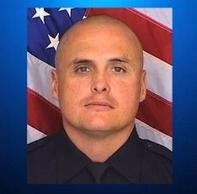 “On December 31, 2017, I was shot multiple times and sustained other injuries while my partners and I attempted to place an individual on a mental health hold. One of my partners was killed during the incident.

In the months that followed the incident, I not only faced the physical road to recovery, but the mental one as well. I had the support of the two other deputies whom had survived the incident with me, but in general, I felt very alone. I was fairly new to my department and had not had the chance to develop many relationships within my department prior to the incident. When I was introduced to the folks from the MC1 Foundation, I immediately felt the sense of community I was lacking after the incident. I met several other law enforcement officers whom had been injured in the line of duty, and they truly understood what I was going through. I have received text messages, phone calls, and well wishes from many members of the MC1 Foundation. These messages have reminded me every time:

I am not alone. The MC1 Foundation does so much for injured officers, but for me, the community they surrounded me with, was truly the greatest gift they could have ever given me.”

"The difference that you have made in my life and the other families that you have helped is quite exceptional and I know that you probably do not know just how much every little thing you do means.

Looking at it from a survivor’s side, I can tell you it means everything."

"My Dad was in a dark spot after his accident. He was ready to retire but wasn’t sure what his timeline was yet. In September 2020 the decision was made for him after he was attacked by a patient on the job. He broke several ribs and had about a liter of blood in his chest. It was a long and painful recovery and he was placed on light duty. He made the decision to retire a few years early due to the severity of his physical injury and the PTSD he suffered from and still suffers from today. There was no way he was going to be able to return to being a Paramedic. The injury caused such serious damage that he and my mom even had to move to a lower altitude.

My parents had the most difficult year of their lives. My Dad was battling with insurance companies throughout the year. He was defeated and upset. He felt like he was trying to prove he deserved something.  Our good family friend mentioned the MC-1 Foundation. When my Dad first heard about the Foundation he just wanted to be a part of the it - he didn’t want the financial support. After talking to you all he was just excited to be a part of an amazing group.

When he received his check in the mail he was emotional. He was relieved and hopeful.  He felt like - for the first time throughout the process - he didn’t have to explain himself.  My Mom was with him when he opened It and she said he was just speechless.

You all changed his life and ours forever. You were a positive light in a dark place. No one realizes the severity of an on-duty injury until it happens. The MC-1 Foundation is truly the light in a very dark place of work-related injuries. We can’t thank you enough for supporting our family. We love MC-1 and we are forever changed and grateful. Thank you MC-1 and all the supporters! You are very special people and are changing lives around the nation!"

WHY WE DO WHAT WE DO 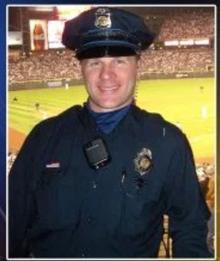 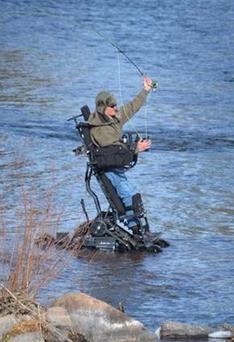 ​There is so much difficulty and so many dark days in this journey and you all bring light and hope back into the picture. It is so hard to explain the level of gratitude that I have (and I know from talking to the other people whom you have helped - they feel the same way) but I want you to know that you make a huge difference in so many lives." 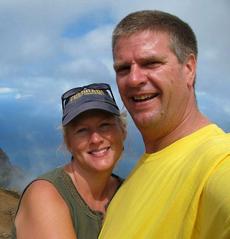 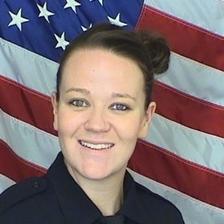 "The MC-1 Foundation helped my family and I more than they know. The recovery process is very long and, at times, very tiring. When the guys from the Foundation first visited me at my house, they lifted my spirits and recharged my battery to continue with the long recovery process. They spent time getting to know my family and I, listening to my survival story and providing emotional support. The day of the run they made us feel like we were the only people that mattered and made sure we saw and heard the support. We were presented a check at a BBQ shortly after and the amount that they raised for us was unbelievable.

I was still not anywhere near full duty and having lost the ability to supplement my income with off-duty work, after just having a newborn baby was very stressful. The Foundation not only ended the financial stress but also uplifted our family when we needed it most.  I feel like I have a personal relationship with each member and I am proud to call them my friends. Every time we get to see them they always make sure to let us know that they are still there for us if we need them and they genuinely mean it. I am lucky to be alive but I am also lucky to know the guys from the MC-1 Foundation. They are truly their brothers’ keeper and they are forever my friends and family." 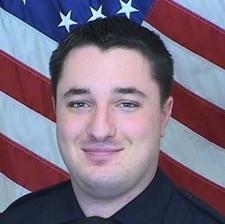 "MC-1 Foundation, words cannot describe how grateful me and my family are for the generosity the Foundation has shown. The first day Jeff walked into my room with an envelope I didn’t know who he was.... Jeff began telling me what MC-1 was all about ... as I opened the envelope addressed to me that check that fell out ... when I looked at it, I began to cry... blessed with gas money, hotel money ... able to bring my parents up to Denver to see me.... While I was in the hospital, I kept saying ‘I’m Alive’ at least a million times appreciating life as I got a second chance." 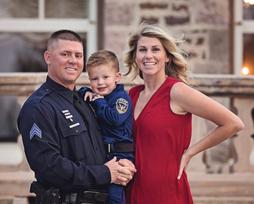 "In September 2016, I was shot during an active shooter situation near a middle school and a hospital. I died twice on the operating table but survived with consequences - I was paralyzed.

As an avid outdoorsman, being stuck in a wheelchair was a huge mental struggle. I could no longer do the things I loved to do because of my limitations."

“In December of 2014, when I was hit and dragged under a car for over half a block – nearly being killed, the MC-1 Foundation reached out to me immediately.

At the time, it was their focus to assist families of officers who had made the ultimate sacrifice in the line of duty, and had passed away. They shared with me about the untimely death of Sgt. David Baldwin, who had sacrificed his life for his community. It was through his inspiration and as a way to always honor him that the MC-1 Foundation was started.

The Foundation told me that their heart went out to our family in this critical time of our lives and that they wanted me to be their the second beneficiary to their annual Honor Run (Sgt. Baldwin’s family being the first). It is challenging to put into words what a blessing this Foundation has been to our family. They treated us like royalty before, during, and after the Honor Run. Because of their unselfish desire to help families of officers who have gone through these critical traumatic incidents, I immediately knew they would become like family to us. And they have! They have never forgotten us, even though it’s been over four years since my incident. I receive calls and texts from many of the deputies and officers involved in this fantastic program. However, it’s not just a program or foundation; it is a family who is always looking to love, care, and assist injured officers in absolutely any way they can.

With all my heart, thank you to everyone involved with the MC-1 Foundation!" 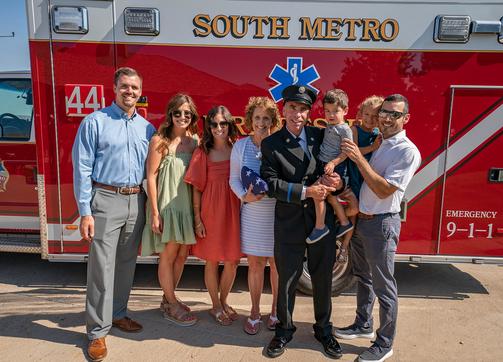 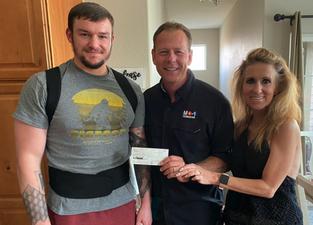 Included in this letter is a piece of my duty belt that was cut off that day... it‘s been my daily reminder to thank God for another day and a second chance at life. To the MC-1 Foundation ... thank you all so much."

​"Then I met the MC-1 Foundation who gifted me with an action track chair. This chair has helped destroy those limitations!

I have put the chair in the river to go fishing, taken it deer, antelope and elk hunting, and I use it to get around our property. Their generosity allowed me to lift my head and realize that I can still do the things I love! ”